The Magic of the Riviera Maya During the Spring Equinox

In the Northern Hemisphere, the spring equinox occurs when the Sun crosses the equator, heading north. It marks the start of spring and is an incredibly special time for the Mayan people of the Yucatán Peninsula.

It usually falls around the 21st or 22nd of March each year. On this date, both day and night last for exactly 12 hours each. Thanks to this magical astronomy, and the careful planning of the construction of the pyramids at Chichen Itza, a wonderous sight occurs.

The Mayans were great astronomers and, as a civilization, they observed the heavens above them to track time and form their own calendar.

The calendar itself is made up of used 20-day months and had two years: the 260-day Sacred Round, or Tzolkin, and the 365-day Vague Year, or Haab. These calendars would coincide with each other every 52 years, and to the Mayan people, this was a special time, like when we celebrate the turn of a new century today.

One of the biggest awe-striking aspects of the Mayan calendar is its accuracy. The calculations made by the Maya priests were so precise that their calendar correction is more exact than the calendar we use in the world today. Quite a feat for something discovered and planned out so long ago!

Why Is the Spring Equinox So Important to the Mayan People?

For the Mayan people, the equinoxes and solstices that occur through the year were important times.

They believed that through their observation of the heavens above, they could listen to messages from their gods, and respond with prayers, sacrifices, or festivals, in order to feed and worship them. If they didn’t, they believed that the gods could die, and the world would end.

The ancient Mayans knew that the spring equinox was the time of the year to plant crops, ready to harvest them on the equinox in autumn. 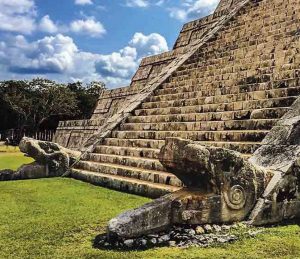 Probably the most famous of all Mayan ruins is the one at Chichen Itza. As well as being named as a UNESCO World Heritage site, this special place is also on the list of the ‘Seven Wonders of the Modern World’.

As well as being a miraculous structure to honor their gods, this temple is also a calendar that marks special times of the year to the Mayan people, one of them being the spring equinox.

Of course, visitors flock to the pyramid throughout the year to see its historic grandeur and beauty, but many more are drawn to visit during the equinox for the extra special festivities and celebrations which happen on these days.

On these days, it’s common for people to wear white-colored clothing to cleanse themselves of negative energy and attract positive energy from the new sun.

The Magic at the Kukulkan Temple

During the spring equinox, visitors arrive in their droves to share in a sacred and magical moment that has been witnessed and celebrated for centuries. On this day the slithering feathered serpent of Kulkulkan appears to slide down the side of pyramid.

According to some experts, during the equinox in spring the god Kukulkan descends into the underworld through the cenote and in the autumn equinox, the god returns to the heavens above through the pyramid.

The incredibly planned construction of the giant temple at Chichen Itza uses the beams of light from the sun in the late afternoon, as it reached the horizon.

It’s a fascinating event that needs to be seen to truly understand its magic!