January 6 is the final day of Christmas festivities in Mexico, which began with the posadas on December 12. It’s known as Día de Reyes (Three Kings Day) and it commemorates the arrival of Melchior, Caspar and Balthazar in Bethlehem. The Wise Men had traveled a long way and brought gifts of gold, myrrh and frankincense to the baby Jesus.

Cards, Shoes and Food for the Three Kings Three Kings Day is similar to Christmas, because in Mexico it’s traditionally the day when children would receive their gifts. This has changed a lot in recent decades due to influence from the United States.

In the days before January 6, children prepare a letter for the Three King’s asking for the toys that they wish to receive, just like you would with Santa Clause. Instead of stockings, kids leave a pair of shoes outside their bedrooms, which is where their gifts are placed. And sometimes they will also leave water and snacks for the wise men and their camels, who are usually hungry and thirsty from their long journey. This may include candy, chocolates or food, which are always gone the following morning. 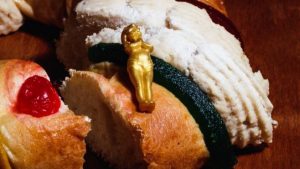 The Rosca de Reyes is a cake made in an oval shape and covered with candied fruits.  Inside of the rosca are tiny plastic dolls which represent the baby Jesus. Anyone who gets the slice with the symbolic baby Jesus must host a party on “Día de la Candelaria”(Candlemas Day) on February 2nd. At this party, the host traditionally serves tamales and hot chocolate. Depending on the region in Mexico, “Día de la Candelaria” varies in traditions and celebration.

We hope you’ve enjoyed this look at Three Kings Day. The best way to learn about it is to experience it personally, so we hope you’ll join us here soon in the Riviera Maya and become a part of this yearly tradition.